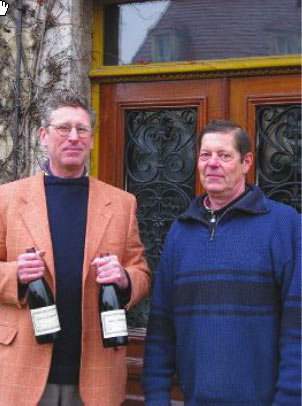 We were up in good time on Saturday morning because we had an hour and a half’s drive from Saulieu to Gevrey-Chambertin, where our appointment with Alain Voegeli was fixed for 9.30 a.m. This is always a brisk affair, because he only makes one wine. He is one of the smallest producers I deal with, cultivating 2.5 hectares of vines. We tasted his 2015 from barrel, and it is looking very promising.

Then we were on to our next appointment at 10.30 up in the hills to the west of Nuits Saint Georges at the Domaine Thevenot-Le Brun. We arrived a little bit early. We rang the door bell. No answer. We saw a curtain twitch in a window of the house across the road. It was Nicolas Thevenot, in his pyjamas. Well, it was Saturday! He appeared a couple of minutes later and gave us a comprehensive tasting. His 2014 whites are completely delicious, and I have bought a significant quantity of them.

The next day, Sunday, we took the train from Beaune, where we were staying, to Corgoloin, for lunch with Damien and Lise Gachot

We had an excellent lunch, washed down with five different wines from the Gachot-Monot cellar. Our train back to Beaune didn’t leave till 6 o’clock, so Damien offered to drive us. He had been up very late the night before, bed at 4 a.m., and he had joined us in several glasses of wine with lunch. He set off on back roads to Beaune.

After driving for five minutes, we rounded a corner as we entered a village – to be met by a posse of gendarmes, with vans and cars, a contrôle, as they say in French. We were stopped. A gendarme approached the car and produced a breathalyser, and asked Damien to blow into it. Broo and I were having kittens. Damien was as cool as a cucumber. He blew into the machine. The gendarme took the breathalyser back. “Zero,” she said. Damien drove off.

As soon as we were out of sight of the gendarmes, Damien punched the air and shouted, “ZERO!” None of us could believe it. He dropped us at the hotel, and I asked him if he’d be returning to Corgoloin by the back roads. He said he’d take the main road.

I’m convinced the breathalyser was defective.