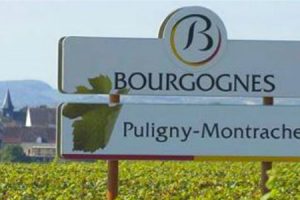 Last month we were in the middle of Monday morning, finishing a tasting with Monsieur Gavignet.

Our next apppointment was with the Nouveau family about 45 minutes’drive from Monsieur Gavignet – we had arranged to do the tasting at 11.30, followed by lunch – the Nouveaus, who are very generous, were going to take us out to lunch at a grand restaurant in Puligny-Montrachet, called appropriately Le Montrachet.

We taste with the family – Claude and Mireille, and their daughter Aline and son-in-law, Stéphane, who is now in charge of making the wine – their 2013 reds, which are crisp, expressive, with lively fruit, and their 2014 whites, which are fine ambassadors for this terrific vintage for whites. Then off to lunch, where we drink the Nouveaus’ wines, including a bottle of their grandest red, Santenay 1er Cru Grand Clos Rousseau 2005 – a great vintage for red burgundy; it still has good deep colour, and firm, assertive flavour.

We say our goodbyes to the Nouveaus and waddle back to the van, full of lunch. I have arranged our next appointment for four o’clock so that we can recompose ourselves – it is with the Domaine Diconne in Auxey-Duresses, where we taste eleven wines, four whites and seven reds.

Tuesday was our last day in the Côte d’Or, the great classic part of Burgundy: a tasting in the morning with Jean-Charles Fornerot, an impish character who makes delicious, old-fashioned white burgundy. Next, at two o’clock, we were at the Domaine Pascal-Prunier in Meursault, where we tasted nine wines with Pascal Prunier, including a brilliant new addition to his range: “Le P’tit Bonheur”, a white which only bears the lowly appellation of Coteaux Bourguignons, despite being produced from a plot of vines surrounded by AC Meursault vineyards – Pascal has inherited the vines from his grandfather, and some of them are a century old. It smells and tastes of proper white burgundy, suggesting that you would have to pay a big price for it, but it is not expensive, a bargain, in fact. Then we headed south, leaving the Côte d’Or for the Côte Chalonnaise.

At 4.30 we were at a domaine new to us, Domaine de l’Évêché, run by Sylvie and Vincent Joussier. They are based in the tiny village of Saint Denis de Vaux, set among rolling hills, with their vineyard, Clos de l’Évêché, stretching out below their house. They make delicious, reasonably priced burgundy, both red and white. When you visit the domaine, everything is spick and span – they are clearly very conscientious, attending to every detail. The style is very clean, but with an element of body and richness. An exciting new discovery.