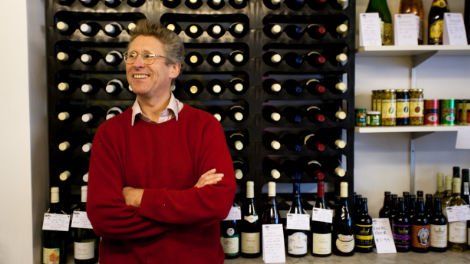 We set off early on Monday morning for the Channel Tunnel, and arrived in Chablis in time for supper at the Hostellerie des Clos, where we had an excellent Michelin-starred meal, washed down with a bottle and a half of burgundy: a bottle of Chablis 1er Cru Montée de Tonnerre 2005 Raveneau – in my opinion, Raveneau is quite simply the best producer in Chablis, making wines that age beautifully, are perfectly balanced, and thrill the palate; the Montée de Tonnerre was no exception; the half bottle was a Gevrey-Chambertin Vieilles Vignes 2013 Esmonin – I used to sell Esmonin’s Gevrey in my shop years ago, and I have a great fondness for it.

The next morning we skipped breakfast in the hotel, even though the Hostellerie des Clos provides the best breakfast in France, because we knew that our first visit of the day, at the Domaine Leger in Épineuil, would include a gourmand-style feast. And so it turned out. Young Monsieur Leger greeted us with his usual effusive welcome, consisting of multiple hugs and kisses accompanied by explosively high-volume expressions of delight at seeing us. He invited us in, where, already laid out for us on the table were three plates (one each) of a dozen snails – breakfast! A magnum of his Épineuil 2012 was open on the table as well. He half-offered us a cup of coffee, and then retracted the offer, saying that the Épineuil would do perfectly well. Mingled in with breakfast, we also tasted his 2014 and 2015 vintages (from bottle, not magnum) – both delicious.

And then we were off to the Pommiers, in the village of Poinchy just outside Chablis, where we tasted 2014s and 2015s – lovely wines, and two terrific vintages for Chablis. Then the Pommiers took us out to lunch in town, before we headed off to the village of Beines, a couple of kilometres beyond Poinchy, to see the Naulin family, where we tasted their 2015s – the style here is more rustic than the Pommiers’, but full of charm and Chablis character.

We left the Naulins around four o’clock, and motored to a town called Clamecy, a depressingly unprosperous place, where we had booked a room for the night at the Hostellerie de la Poste, a sprawling building in the middle of town. Our room was spacious, although the heating arrangements were rather underpowered. We went down to the dining-room for supper, where again some expense appeared to have been spared on the heating. Unpromising. We ordered two menus, which looked nice, and a bottle of Chablis Premier Cru “Les Lys” 2014 Long-Depaquit. Both the food and the wine were delicious – hats off to the kitchen!

The next day our first appointment was in Gevrey-Chambertin.