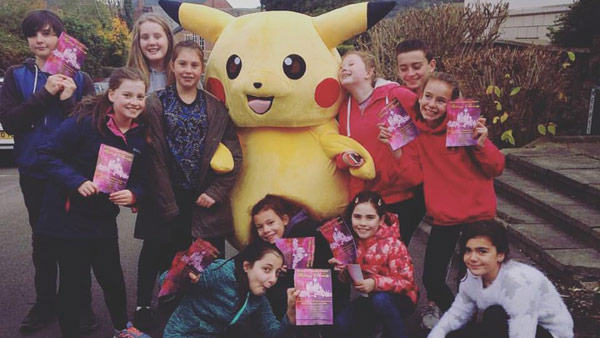 Pokemon Go?  Where do they go?  Well when Pokemon are not being hunted, some of them like to tread the boards and a couple of weeks ago, auditions were held for Sleeping Beauty in Monmouth’s beautifully traditional theatre, The Savoy.

Groups of brightly coloured Pokemon were lining up outside the theatre along with the actors trying out for roles in Sleeping Beauty, from the Princess to the evil Warlock Arachno, and principal boy Flash. Director Peter Scott and Producer and writer Sam Densham had not realised how popular the yearly panto at the Savoy had become, actors were coming from around the country. Peter said “we have never seen such talent, how do we choose”. First we cast Sarah Hancock, a local actress with a beautiful voice and that ‘princess’ look. But that was easy compared to choosing the right Pokemon: the colour, the acting ability and what about dancing who could do it all?

Well, we finally did make a decision, the Pokemon who got a part in Sleeping Beauty is PIKACHU! Sam Densham said “he really does bring something original to the role, and brings the script to life through mime! We are sure he will make a fabulous addition to the panto family!”

Just to let you know that tickets are still available from the Savoy at the box office or online but keep your eyes open around Monmouth in case you get a chance to grab a selfie with Pikachu, he loves Monmouth, especially White Swan Court, he just keeps hanging around.

Spontaneous Productions would also like to introduce you to the rest of the cast, this year we see regulars, Joel Duffurn, Emma MacNab and Kevin Tillet, and as well as Sarah Hancock, we have Charlotte Coltman and our amazing West End star Robert Traynor who has been working in the West End in a production of The Go Between starring Michael Crawford.

Join us, and join in the fun by making up the most important cast member, our audience.