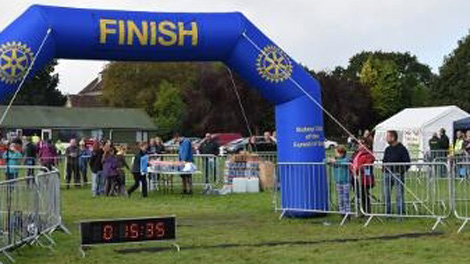 Now in it’s 30th year, the Forest of Dean Half marathon has evolved from a road race around Coleford, to a fully traffic free run around the heart of the Forest centred on the Speech House. The changes have been made through the need to accommodate the increasing number of runners, and their demands for a scenic yet still challenging route. The majority of the route is now off road on firm forestry trails.

A race village on the Speech House field with free parking on site gives a great focus for the start and finish of the 13.1mile race. Facilities include, sports retailers, charity stalls, hot food and drinks and also free after-race massage for the runners.

The event has attracted runners from across England and Wales and often from further afield, though the majority of runners are from within the local counties. The abilities range from very talented athletes who will complete the course in around 75 minutes to the more relaxed joggers who will spend up to 4 hours enjoying the route.

The Rotary Club of the Rotary Forest of Dean took over the organisation of the Half Marathon in 2003 and has held races every year since then. The Rotary Club uses the money raised by entrance fees to support charities both local and further afield. Runners who wish to are encouraged to raise money for their own charities.

The event is the result of close cooperation from a number of local groups with over 200 volunteers coming together to produce what has been regarded as one of the best runs around.

Entry can be done online or by post. To enter and to find out much more about this and other runs they organise go to the race website at www.forestofdean-halfmarathon.co.uk

The Spring Trails Half Marathon is on Sunday 19th March.