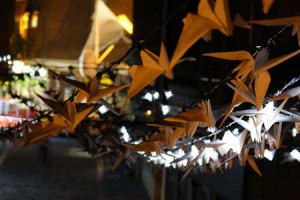 Luminous Birds recreates one of nature’s most amazing phenomena, the ultimate act of co-operation – birds flocking together as they fly. The spectacular installation opens at Tintern Old Station on May 6 and continues until May 15. As night falls during the festival, hundreds of origami-style birds will come alive with synchronised lighting sequences creating the effect of birds in flight. The project was first commissioned by Kidderminster Arts Festival 2015 in partnership with Cryptic.

The festival team is now inviting people living along the valley to get involved in another avian experience by helping to make Origami paper birds, which will create Kathy’s second sculptural video installation, One Thousand Birds. This will be accompanied by immersive sound composed by Matthew Fairclough and will be staged at Tintern Old Station at the same time as Luminous Birds. Free, drop-in Origami workshops will be held in the foyer of The Shire Hall, Monmouth on April 4 and 5, 11am to 3pm each day or people can make the birds and send them to the festival organisers.

Kathy says: “One Thousand Birds brings people together through the collective act of making Origami birds, based on the crane, using the traditional Japanese art form of folding paper. An ancient Japanese legend states that anyone folding 1000 cranes is rewarded with a wish. On World Peace day, many people from all over the world make and send origami birds to Japan as a wish for world peace. By taking part in the project, participants will learn the art of Origami and become part of a unique celebration happening here in the Wye Valley.”

Joana Miranda who is co-ordinating the Wye Valley project says: “To take part all you need is A4 paper, preferably recycled, and Kathy’s tutorials. There’s a Vimeo tutorial available online if you search “Kathy Hinde origami bird instruction video” or you can print and follow PDF instructions available from the Wye Valley River Festival website.”

The birds’ team is running Origami workshops over the coming weeks. Care homes, schools, community groups and others in the Wye Valley who would like to host a workshop and anyone who wants to arrange collection of a large flock of birds can get in touch with Joana at joanadeseperada@gmail.com.

The Wye Valley River Festival, has its spectacular launch in Hereford on April 29 and ends with its fabulous finale at Chepstow Racecourse on May 15. For more information visit www.wyevalleyaonb.org.uk; follow on Twitter: @wyebeauty #wyevalleyriverfestival or like the festival on facebook: www.facebook.com/ wyevalleyriverfestival.