When men and women leave the Armed Forces, despite the bluster you hear about resettlement from the Government, about the ‘Armed Forces Covenant’ and the now vast array of charities that exist; the reality is, other than their own families in their home towns (if indeed they are headed back to their home town), there really isn’t anyone physically there for them, they are alone, and the isolation is something they never really experienced in the forces as they were always part of a team.

The Armed Forces trains or ’conditions’ the individual, constantly, to be a soldier, sailor, airman or marine, but does not ‘recondition’ men and women to be a civilians.

When leavers are younger, perhaps in their late twenties, it is something they often haven’t given much thought to, and because of their ‘conditioning’, the ‘Pride’ which is instilled in them, and their conditioning to persevere, to keep going, no matter what, they simply try and make the best of it. They have to find a job and find somewhere to live, and they are all too often too proud to ask for help…

This is sometimes so alien to them, that they end up homeless or in prison, and this simply cannot be allowed to continue. It is a dreadful time especially for those that have served for a long period of time, and/or have associated psychological problems, such as Combat PTSD.

The effects of PTSD are minimalized during service, because of the mutual support of those in your unit, but after your service is over, the isolation the veterans tend to feel, magnifies underlying psychological issues like Combat PTSD. There are also plenty of veterans out there not so drastically affected, working and supporting families, who were once part of a cohesive, professional team for which the military had conditioned them, and are now struggling with feelings of isolation. This is often greatly magnified if said individuals have experienced combat. Many struggle to come to terms with this, and feel guilty because they believe they shouldn’t feel isolated when they are part of a family.

We are a group of veterans and serving members of Her Majesties Armed Forces, and like other Veteran’s Breakfast Clubs around the country and overseas our ethos is mutual support. It works because we all have a similar humour and outlook, the social life we enjoy together is like our service days. Our club activities include dinners or other planned events and where personal support is always on hand for those who need it.

New members can find out what’s on and may join either of our clubs by applying to join our local Facebook groups at the following links or can just turn up to one of our breakfast mornings.

Caldicot: coming soon to a venue near you! 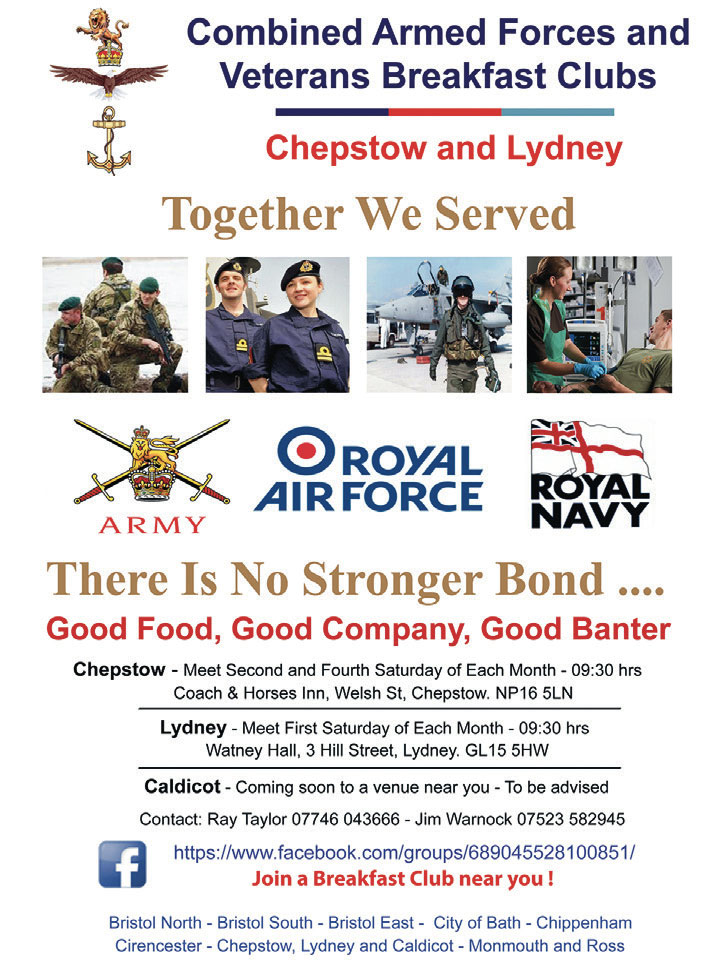