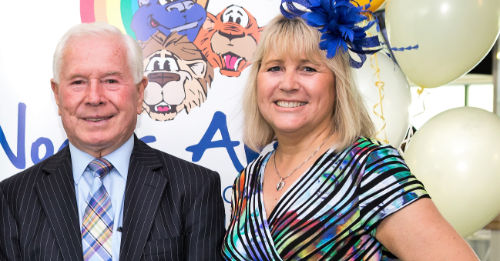 The 11th Royal Ascot Annual Charity Day, held at Chepstow Racecourse in June has broken its fundraising record this year, raising more than £60,000 for the Noah’s Ark Children’s Hospital Charity. The popular event, organised each year by the charity’s vice chair, Julie Hayward, was attended by 300 guests who collectively helped raised £10,000 more than last year’s impressive total. The money will provide a huge boost to the charity’s Tiny Lives Appeal which aims to raise £1 million for the new neonatal unit at the University Hospital of Wales.

Thanks to the hospitality at the racecourse, 300 guests enjoyed a fantastic lunch and afternoon tea watching the live racing from Royal Ascot. Thousands of pounds were raised from very generous sponsors, great auction items which included a car and a gold cup raffle.

Having raised more than £20 million to build and equip Wales’ first and only children’s hospital, the Noah’s Ark Charity continues to work hand in hand with the NHS, providing funding for the most up to date equipment and facilities. In November last year, the charity also launched the Tiny Lives Appeal which will support the care of some of the most premature and critically ill babies in Wales.

Event organiser and vice chair of the Noah’s Ark Charity, Julie Hayward, said: “We’re delighted at the continued success of our Royal Ascot Annual Charity Day and the fantastic amount raised at this year’s event for such a worthy cause. We’d like to say a huge thank you to everyone involved and give a guarantee that the money you have helped raise will go straight where it’s needed most.”